3.1 of 5 Stars (101 customer ratings)
There are 101 customers who found Safer VPN on our site rated the product. 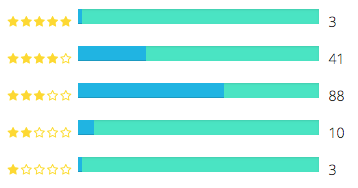 Carolina  07/05/2018
In addition to the app it also offers a Chrome extension, which really helps me for my business.

SaferVPN software is made by Safer Social Ltd., headquartered in the Israeli city of Tel Aviv, and founded in 2013. The company has continuously expanded its VPN network over the years. Now, Safer Social Ltd. operates a large selection of servers in more than 35 countries worldwide.

The VPN client SaferVPN is protected by a secure AES-256 encryption and a hardware-based NAT firewall. Users can activate the kill switch function and are always automatically and without interruption connected to the fastest VPN server thanks to the auto-connect function. The VPN provider is not subject to American or European data storage regulations as Safer Social Ltd. is seated in Israel. Only the necessary data are stored, these do not include traffic logs. It is also possible to pay anonymously using Bitcoins.

The website offers users answers to the most important questions as well as detailed guides. Customer support is available all days of the year per live chat or ticket system. All users additionally benefit from a 14-day money-back guarantee.

Soon, several popular series will once again release new seasons. These include Game of Thrones and The Walking Dead. The seasons are at first however only available in the countries of production and can only be streamed by users who live in these countries. It takes a few months for the series to be released in dubbed versions in other countries. Earlier streaming is impossible due to IP blocking. It gets even more annoying with broadcasts of sports events such as the NBA or NFL. These events usually cannot be streamed in other countries at all.

A VPN client makes it possible to easily bypass IP blocking. The VPN user encrypts his/her actual IP address and changes his/her virtual location. To streaming platforms, such as Netflix, Sky, or Amazon, it seems like the user is no longer based in a different country. He/she can therefore directly access all series, films, and sports broadcasts from home and without delay.

SaferVPN users always have the right virtual location and a free IP address at their disposal with a large selection by VPN-Servers in more than 30 countries. There are no server change restrictions. The maximum download speed in everyday use is 51 Mbit per second. This transfer rate even sufficed for high-quality Ultra HD content. There is an official SaferVPN software app for all common mobile devices such as smartphones.

Going to the cinema is a lot more expensive now than it used to be, and new movies are released all the time. A lot of users prefer downloading the films from the Internet to regular cinema visits. The same goes for series, music, and expensive software. The large file sharing platforms eMule, BitTorrent, and eDonkey offer users easy access to content. Unfortunately, these downloads often infract on copyrights. File sharing users can expect to pay a hefty fine as punishment if they get caught.

Sharing files with a VPN software is a lot safer. The software encrypts the IP address and makes it impossible for third parties to trace the illegal activities. Most providers in this industry explicitly allow the necessary P2P connection for file sharing. They do not limit downloads and do not store any user data. Such VPN software allows users to download films, series, music, and software free of concern.

It is in principle possible to share files using the SaferVPN software, albeit only through servers located in the Netherlands. This is not a problem for casual downloaders. Users who stand out because of excessive file sharing are usually blocked from further use of the software. The high transfer rates combined with the practical kill switch function are especially useful for file sharing. The file sharing programs can be automatically shut down by the software in case of connection loss.

Internet traffic is routed through different nodes in each country, allowing each country to filter the data packets and individually censor the Internet. Most countries decide not to do so, allowing users full access to all services and websites. Unfortunately, there are some countries like Turkey or China that censor the Internet and do not give their inhabitants full, unrestricted access. They censor some of the most famous websites of the world such as Facebook, YouTube, or Wikipedia.

VPN software enables unrestricted and full Internet access in these special countries such as Russia, Iran, China, and Turkey as well. The software changes the virtual location of its users, making it impossible for country-specific firewalls to restrict or block the Internet. A VPN client additionally secures Internet surfing by encrypting all data communication beyond recognition. Neither the data nor activities of the VPN user can be accessed by third parties.

SaferVPN customers can access VPN-Servers in over 35 countries around the world. There are therefore enough virtual locations for its customers. All data connections are protected by secureencryption and an NAT firewall, the data of the VPN user cannot fall into the wrong hands. SaferVPN supports all common protocols and additionally offers its users the secure IKEv2 protocol.

All users should now know, especially after the events surrounding Edward Snowden, that spying software is real and that it is easy for Internet data and activity to fall into the wrong hands. Companies can use these data for targeted advertisements; hackers can use these personal or even banking data to do significantly more damage. Many criminals call the Internet their home, and this makes it imperative for each Internet user to protect his/her privacy the best he/she can.

Accessing the Internet without protection means exposing oneself to all risks. Users can, on the other hand, use VPN software to reliably protect their privacy and the security of their data and activities. Users with VPN software surf from an encrypted data tunnel. Authorities, companies, and even hackers cannot access the data from this secure tunnel and as such cannot record user data or surfing behavior.

Safer Social Ltd. is located in Tel Aviv, outside of Europe and America. That is why the company does not need to comply with the data storage regulations of these regions. The VPN provider only stores the necessary data and no user activity data whatsoever. Users remain completely anonymous as no online activity is recorded. SaferVPN customers benefit from high-quality encryption and a secure NAT firewall. They can also activate the useful kill switch function. These security features ensure that the data of SaferVPN users cannot fall into the wrong hands. All protocols supported by the VPN provider are listen in the following table.

SaferVPN customers have the choice between various payment methods. They can also pay for the VPN software completely anonymously using Bitcoin. The useful auto-connect function immediately connects users with the fastest possible VPN server. All security features of SaferVPN are listed in the following Table 2.

SaferVPN customers benefit from high-performance servers in more than 30 countries distributed across the globe. We managed to download files at a maximum speed of up to 39 Mbit per second in our tests. A good speed compared to other providers. We were especially convinced by the upload speed of maximum 25 Mbit. SaferVPN offers its customers stable performance with high transfer rates and server density. There are no data volume limitations.

The VPN servers of SaferVPN win its users over with low latency and an average time to establish a connection of just 7 seconds. Our tests showed a good ping of just 6 ms. This also makes the VPN provider well suited for gamers who play online ego shooters. The VPN software is also capable of handling Ultra HD content with high download speeds and unlimited data volume. All performance data of SaferVPN are listed in Table 3.

The SaferVPN website contains a lot of guides and information on the installation and operation of the VPN software. Customers can additionally contact the support service 24 hours a day via the ticket system or live chat. All platforms and devices compatible with SaferVPN are listed in the following table.

SaferVPN users have plenty of virtual locations at their disposal thanks to the good and large selection from servers in 30 countries worldwide. SaferVPN offers its users protection by NAT firewall and high-quality encryption. They can additionally activate the useful kill switch function. As the Tel Aviv-based company follows its own logging policy, no more user data are stored than necessary. The combination of low latency, unlimited data volume, and high transfer rates is ideal for streaming and gaming.

SaferVPN offers its customers high-performance VPN software that is intuitive in operation. It works on all common devices and platforms. Customer support is always at users’ disposals if they have questions via live chat or ticket system. It is possible to test the VPN software out risk-freefor 14 days. The VPN software can also be paid anonymously using the digital currency Bitcoin.